This December I stumbled across a collection of short stories by a twentieth-century Italian author, which immediately intrigued me for its title: Il panettone non bastò e altri scritti natalizi, or Panettone Was Not Enough, and Other Christmas Writings. Being a fan of food in literature, I was attracted to that “panettone” in the title and was eager to read the story. This month I was surprised to see an abundance of panettones in the U.K.: not that there was much shortage last year, but I have a feeling they have proliferated much more and more widely in the last couple of years. Right at the entrance of Morrison’s, for example, I was welcomed by a number of different types of panettone, with even one hybrid type – “panettone bread” – being directly produced at their on-site bakeries. I remember Tesco’s already producing some kind of continental Christmas sweets, including panettone, a few years ago; now Waitrose, too, seems to have expanded their own series of Italian panettones and German stollens. Nero’s coffeeshops even sell mini panettones all year round. All in all, it is quite funny to see so many panettones around, but also rather heart-warming for an Italian expat like myself.

Panettone is originally from Milan and there are many legends surrounding its invention, all leading us back to the glorious times of the Renaissance, when Milan was at one of its most glorious moments. It is commonly believed (or at least I have heard this a few times now) that the name “panettone” derives from the baker who invented it, called Toni. Panettone would then effectively mean “pan del Toni”, or Toni’s bread. Of course, this is a legend and panettone had probably been around from way before then, as a way to preserve fruits during winter – the same concept behind the British fruitcake and the German stollen. The Italian monolingual dictionary Treccani tells us, however, panettone simply means bread, from Milanese “panatton” (“big bread”). In fact, panettone’s own peculiarity is that it feels more like a bread than an actual cake, which perhaps makes it so popular abroad these days, making it less heavy than fruitcake and stollen. Panettone also has more volume, with its characteristic dome-like shape and fluffy texture inside. I have never heard of any Italian making their own panettone, although I am sure some do: it is customary to purchase it in one of the now many variants available. The traditional kind wants raisins and candied fruit (mainly orange and cedar), but over the years bakeries have come up with various types to suit all tastes. Children notoriously prefer the one with chocolate chips, and Sicilians’ take on it is with a greenish pistachio cream. While there are many regional kinds of Christmas sweets in Italy, panettone has now become our national Christmas cake, taking over all the others on the Italian Christmas table.

Dino Buzzati (1906-1972), an Italian journalist at Milan-based Corriere della Sera from the interwar period, gives us an insight into how Christmas was perceived and celebrated in the twentieth century. Buzzati did not like to exchange gifts for Christmas and allegedly hardly ever did; he also blamed Christmas for its new, post-war consumerist attitude as he preferred a simple, honest, peaceful Christmas “of the times gone by”. It is uncanny to see how his descriptions of post-war Milan and its Christmas frenzy are not dissimilar from what we witness these days, in any big city around Christmas time. Despite Buzzati’s apparent dislike of contemporary Christmas celebrations, he would write a piece on this topic every year, and at times even more than once a year, which I think somehow shows his own ironic fascination with the magic of Christmas itself.

The short story entitled ‘Panettone Was Not Enough’ describes what we would see now perhaps as an unusual Christmas story, as it is set during World War II in the house of a modest Milanese couple. On Christmas Eve 1944, a dentist stops at the local cafe for his usual drink, and discovers the café owners on that evening are smuggling freshly baked panettones, a rarity during the war. He impulsively decides to purchase one to cheer his wife up: the smuggled panettone may help them enjoy Christmas in spite of the war. What we found out during the story, and which is hinted at in the story’s title, is that the smuggled panettone was not enough to save Christmas for our Milanese couple: a constant fear of bombings and air raids did not fail to accompany them over the course of Christmas Eve and Christmas Day. The dentist protagonist is particularly worried about the enemies attacking Milan at Christmas, even during the Mass in Milan Cathedral, which the Milanese people believed “it could not be bombed” (p. 47) during the war.

Buzzati’s Christmas writings are all rather unique:from his Christmas report in Addis Abeba during the Italian occupation of Ethiopia to his re-imagining of Mr. Scrooge spending Christmas on the Atlantic Ocean, to very intimate portrayals of Milanese people alone at Christmas; some of his writings are also accompanied by his own, peculiarly stunning illustrations. In their blend of nostalgia for the past, bitterness for the present and contempt for consumerism, Buzzati creates some compelling evidence that he understood Christmas, and humanity, rather deeply. There is no recipe this time, as I have not attempted at making panettone at home, unfortunately, due to my inexperience at making bread, and the lack of time (panettone dough needs at least a day to rise). I have, however, taken some photographs of a most delightfully scented panettone from a local bakery. For me, panettone remains the symbol of Italian Christmas tradition, and I hope you enjoy it nevertheless! The Literary Kitchen wishes you a lovely Christmas and a fantastic New Year! 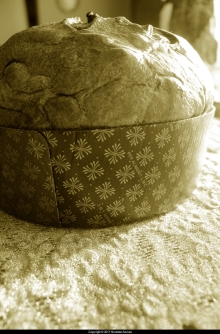