Against all commonly believed stereotypes, Italians can hate pasta. Indeed, let me confess: if I had to choose between a plate of spaghetti and a nice homey risotto, with whatever seasoning, I’d pick risotto again and again. Quite a few blog posts ago, I was telling you how to fix a nice tomato sauce for your spaghetti, and how pasta was of course portrayed as quintessentially Italian for E. M. Forster in Where Angels Fear to Tread. Back there, Forster, an Englishman in Italy, saw a hearty plate of spaghetti in a tomato sauce as the epitome of Italian dexterity at eating as well as Mediterranean indulgence conquering the British expatriate. Today, on the other hand, I am going to tell you the story of an Italian who hated spaghetti so much that he put in writing: Filippo Tommaso Marinetti. Marinetti, the father of Italian Futurism, is the author of a good number of literary and aesthetic manifestoes: what is perhaps lesser known to the general public is that he also wrote a ‘Manifesto of Futurist Cooking’, and published Futurist Cookbook.

Marinetti, born in Alexandria (Egypt) but based in Milan in the inter-war period, liked to break away from tradition, at least with words; so in his Futurist Cookbook he literally declares war to pastasciutta and acclaims the rise of risotto. Pasta is indeed quintessentially Italian, and precisely for this reason he thought that Italy should detach itself from its own culinary stereotypes, to embrace new ones, hence the need to create a series of new, inventive dishes, like the paintings of his fellow artists, and the works of literature he himself wrote. One of these dishes is precisely risotto with oranges, or orange risotto. According to Marinetti, in the 1930s Italy had to start developing a new type of cuisine, rather than fossilize over pasta. Indeed, the Futurists ‘intend[ed] to change the tastes and eating habits of the Italians.’ (p. 67). ‘[I]t is not just a question of replacing pasta with rice, or of preferring one dish to another, but of inventing new foods.’ (p. 67). 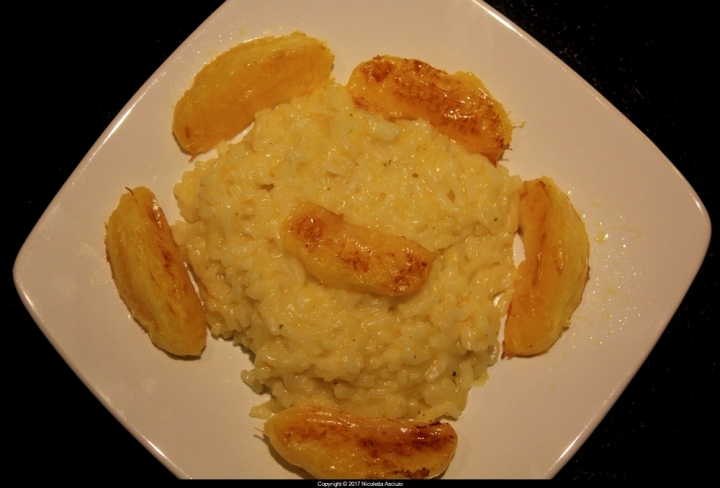 These new foods were seen as art works themselves, and if you take a look at Futurist Cookbook you’ll soon see how some of these dishes are quite impossible to make, let alone even conceive of. The Futurists even opened a futurist restaurant in Turin, Italy, called Taverna Santopalato (The Holy Palate Restaurant). Their futuristic menu on the first evening (8th March 1931) featured certain dishes which are quite impossible to imagine for us today, such as ‘Totalrice with wine and beer’, ‘Edible Landscape’, ‘Italian Sea’, ‘Elasticake’, and more (p. 72). Even though Marinetti attempts at explaining each dish in the cookbook, his descriptions are meant to be evocative, stirring a certain curiosity rather than whetting your appetite. Totalrice, for example, is simply described as ‘a risotto, Italian style, seasoned with beer, wine and fondue.’ (p. 77). Rice, Northern Italy’s staple, rather than Southern Italy’s pasta, appears everywhere in the cookbook and in this first futurist menu: ‘We must fight against puddles of sauce, disordered heaps of food, and above all, against flabby, anti-virile pastasciutta.’ (p. 67) Long live rice!

The recipe I selected is not from their premiere dinner of 8th March 1931, but is still taken from Marinetti’s cookbook. Interestingly, though, orange risotto has become a thing now: if you just google ‘risotto all’arancia’ you’ll be given many variants on this simple but extravagant recipe, and none of them seems to be aware of its futurist inventor. The recipe I followed for the blog is from my mother – with the addition of Marinetti’s fried orange slices, while his description of this bizarre risotto is as follows:

[…] The menu calls it ‘The Roar of Ascent’ but Academician Marinetti rebaptizes the dish ‘Orange Risotto’, in which the rice is still the rice … of days gone by, but the sauce – oh, the sauce! – is based on oranges. And slices of fried orange gild the blanket whiteness of the dish.

The orange risotto, we are bound to say, provokes a little unrest in the ranks.’ (p. 96)

The orange risotto is a sensation to the palate but also a sensation for Italian cuisine, combining fruit with savoury rice. I hope you shall enjoy it – buon appetito! 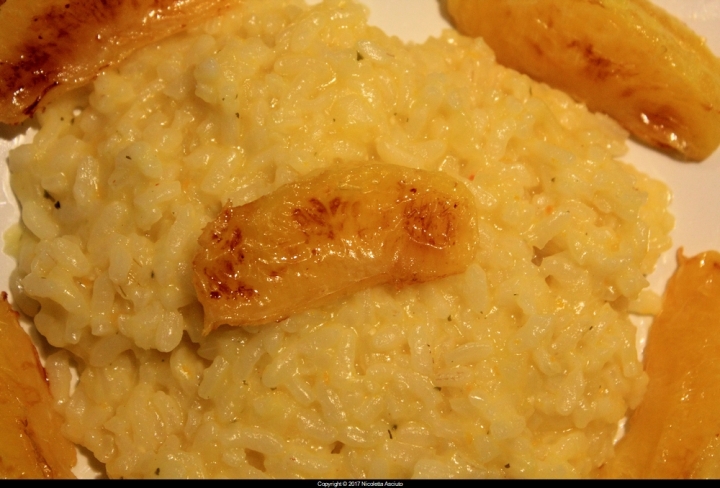